35 years of experience. Tens of thousands of flights done! 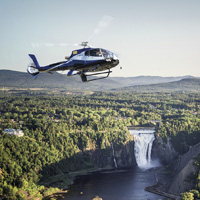 Explore Quebec City and the Saint Lawrence River from the air!

Take in the charm of Quebec City and the mighty Saint-Lawrence River. Fly over all the magnificent attractions of Quebec City, including the Château Frontenac, Old-Quebec, the plains of Abraham and more! Take in the beauty of the 83-metre-high Montmorency Falls nestled between the river and the cliffs. The majesty of the Saint-Lawrence River is sure to amaze and enjoy the charms of île d`Orléans, an enchanting harbour in the middle of the Saint-Lawrence. An unforgettable flight!

YOU WILL SEE:
The impressive Montmorency Falls, nestled between the river and the cliffs.
The verdant île d`Orléans and the bridge.
The Château Frontenac overlooking the majestic Saint-Lawrence from the Dufferin Terrace.
Quebec City Fortifications and the Citadel.
Old Québec, a UNESCO World Heritage Centre.
Cap Diamant, the highest natural point in Quebec.
Battlefields Park (Plains of Abraham).
Promenade Samuel-de-Champlain.
Quebec Bridge and the Pierre-Laporte Bridge.

THIS HELICOPTER TOUR PACKAGE ALSO OFFERS:
Audio guide available in English, French, German and Spanish.
A guided VIP tour of the Helicopter hangar and maintenance centre *.
Free access for one person to the Helicopter Discovery Hub and access to the flight simulator *.
* Complimentary activities offered subject to availability.

CONDITIONS:
This package is for one person.
* 2 passenger minimum per helicopter is required for take-off. Possibility of pairing with another passenger when possible.
Maximum weight for participant: 280 lbs (127 kg).
Minimum cancellation time - 48 hours. No refunds given for last minute cancellations with less than 48 hours notice.
Be sure to arrive at least 30 minutes before the departure time.

35 years of experience. Tens of thousands of flights done!

See other products of thecategory: Helicopter Quebec
See all categories